The Annual Report of the Swiss Financial Intelligence Unit 2017 came out. It shows that 2909 money laundering cases have been reported to the Swiss Money Laundering Reporting Office. 5300 Million Swiss Francs have been frozen as a consequence of such reports.

Are all this 5300 Million Swiss Francs the criminal proceeds deriving from money laundering activities?

According to this official report each single day 11 examples of money laundering methods have been reported. That’s an absolute world record.

Are you using the most efficient Tax Strategy for your business?
Do you take advantage of Tax Loopholes globally? Are they tax-compliant or a ticking Time Bomb?

Then you should sign up in our international Tax Strategy Letter.

Be 110% sure that your Tax Strategy will not end in prison.

Analysis on Stages of Money Laundering based on the Annual Report

I am going to analyse with you the most important facts and figures listed with the last Annual Report published by the Swiss Financial Intelligence Unit, the Money Laundering Reporting Office Switzerland in 2017.

What I am showing to you now, has nothing to do with money laundering methods you may know from Hollywood movies. 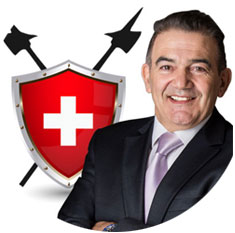 Never before, in the history of Swiss banking such a big amount of money has been frozen in one year only.

The numbers are very impressive. But, you have to consider that Swiss banks are the market leaders with private banking activities. Swiss banks are managing 30% of all private money in the world. 30% of all private money in the world is a lot of money. Such a record amount of money involved with money laundering activities is the best evidence that Swiss anti-money laundering framework works very successfully.

“Are all this 5300 Million Swiss Francs frozen money representing the criminal proceeds from money laundering methods? “

No, because after a formal Suspicious Activity Report the funds must be immediately frozen based on suspicion only. Roughly 50% of the cases have been forwarded by the Financial Intelligence Unit to the Criminal Prosecutors for further investigation and for the remaining 50% of the cases it came out that the funds had a legitimate background history.

Examples of Money Laundering: What does it mean for a client of a Swiss bank?

If you do not properly collect your invoices and your agreements showing the legitimate source of your money, you are under risk to be reported in the future.

In fact, 50% of the reported funds were owned by innocent account holders. Due to the high level of alert you do not have to be a criminal to become your account frozen.

What are the most frequent criminal acts and cases involved with cleaning money?

Roughly 50% of the 5300 Million CHF is representing the proceeds of corruption money and fraudulent activities. International fraud and corruption are the most frequent criminal activities in connection with money laundering schemes.

The amount of frozen corruption money has increased 23% compared to the year before.

Why it has become actually so difficult to hide corruption money with Swiss banks?

Until 18 years ago, until 1999, it was perfectly legal in Switzerland to deduct corruption money from the income when calculating the taxable income.

Let me give you an example: if a big Swiss company spend and paid a substantial amount of money to a foreign official as a bribe, it has been fully legal practice that the corruption money has been deducted from the income to pay less tax. Since 1999 this is not legal anymore.

When I worked for a Swiss bank I managed 80 bank accounts in the name of 80 BVI-companies controlled by 80 medical doctors resident in France. The 80 doctors were entitled to receive a commission, if they implanted an artificial device of a certain brand in the body of their patients.

In France, it was illegal to collect such commissions because a medical doctor working in a public hospital was considered to be a governmental officer. In Switzerland, it was completely legal until the law changed in the year 1999.

What is a typical compensation scheme to make corruption money clean?

Let me give you a real life example of stages of money laundering:

A governmental official in Brazil responsible for construction permits for real estate projects handed over his illicit corruption money in cash to his lawyer in Sao Paulo. This is the first step showing one example of some frequently used money laundering methods. The corrupt officer opened a bank account in Switzerland in the name of an offshore company.

Often, a British Virgin Island company, known as BVI-company, with bearer shares has been frequently used because of the high level of anonymity due to bearer shares, the absence of book-keeping requirements and – last but not least – the Swiss bank secrecy.

The lawyer in Sao Paulo instructed his business partner and lawyer living in Singapore to prepare a Commission Agreement for a commodity transaction between a Singapore and the BVI-company. The Singapore-company wired the exact amount of corruption money, minus 5% commission, to the Swiss bank account in the name of the BVI-company.

The duly signed Commission Agreement and the invoice for the payment of the commission have been submitted to the Swiss banker managing the bank account of the BVI-company to document the legitimate background of the transaction. Due to the low compliance level at that time, the justification for the payment has been very simple: The Brazilian officer facilitated a commodity transaction and earned a commission.

The Brazilian lawyer used the same money in cash for one of his clients in need to corrupt somebody else. Cash money is rare and difficult to collect. It will even be more difficult in the future for big amounts.

The advantage of such a compensation scheme is that the corruption money has not been smuggled out of Brazil but has arrived as bankable and laundered money in Switzerland. Such compensation schemes are not tolerated anymore. As shown in the Annual Report, the high level of compliance makes it very difficult to launder illicit corruption money and finding successful stages of money laundering. The level of detection for corruption increased 23% in one year only. Switzerland is not the right banking destination to stash corruption anymore.

76% of the 2909 suspicious activity reports were based on external information such as the internet, the media or third parties.

Often, the source of information triggering suspicious activity reports comes from newspapers. 9% suspicious activity reports have been generated based on transaction monitoring tools. 5% of the reports are referred to cash transactions. The rest is based on information coming from the official investigators responsible for a pending investigation.

In fact, the name of the governmental officer appeared in a newspaper in Brazil. He’s name was mentioned in connection with an investigation for corruption. He’s lawyer has been mentioned in connection with stages of money laundering. The Swiss bank managing the account in the name of the BVI-company maintains a register. The register is listing all the names of the ultimate beneficial owners of offshore companies having bank accounts. The name mentioned in newspaper in Brazil popped-up on the screen of the compliance officer of the Swiss bank.

One of the most famous compliance tools is known as “World-Check”. It’s a compliance database listing all names appearing in the world-wide media in connection with criminal activities.

The compliance officer has verified the history of transactions of the BVI-company’s bank account controlled by the governmental officer in Brazil. He asked the client to provide additional documentation to justify the commission. The client was not in a position to show that the payment of the commission was genuine. The Swiss bank filed a suspicious activity report. The account of the BVI-company has been frozen. The Swiss authorities have informed the authorities in Brazil. As you can see based on my example, Switzerland is not a good place anymore to stash criminal money.

If you want to be on the safe side with your sensitive transactions, let’s discuss it. Pick up the phone and give me a call now on +41 44 212 44 04. Tell me your specific situation and I will propose you the most efficient solution to remain on the safe side. Be rich and remain rich. Have a wonderful day.